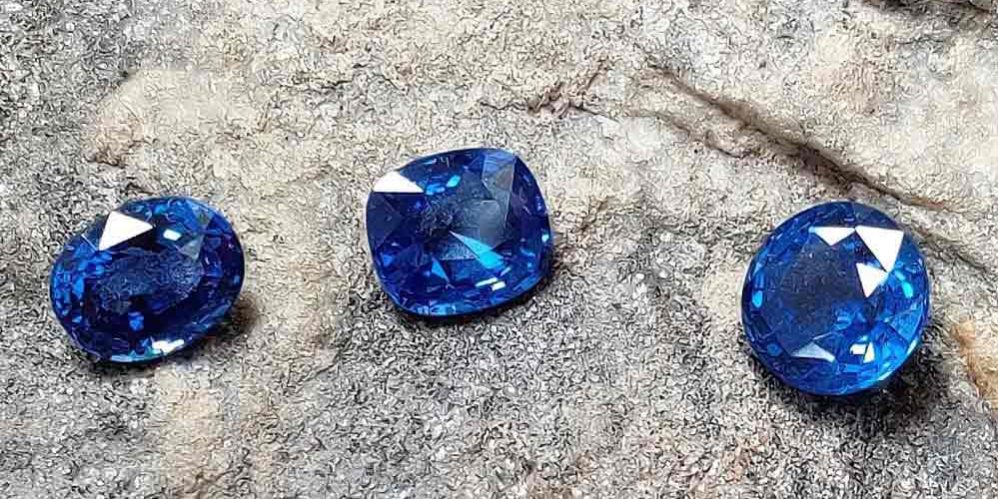 
Sri Lanka (formally called “Ceylon”), is still the top producer for fine gemstones in the world. For thousands of years fine sapphires have been found in this special place. Most notable are the Blue sapphires. Blue sapphires are the most popular and sought after type of sapphire. They have been the prized possessions of emperors, kings, queens and collectors for thousands of years. Still today, Blue sapphire is the most well-known and in demand colored gemstone. Royalty gives sapphires over diamonds as engagement rings because they are known to be far rarer than diamonds.

Blue sapphires come in various hues from very light pale baby blue to a very rich royal blue. A sapphire that is black should not be called a blue sapphire; this is a commercial quality stone. If a sapphire is to be called blue, it must not have more than 15% secondary color tones within the stone such as yellow, green or purple. Sapphires that have secondary colors that are significant should be classified “greenish-blue” or “purplish-blue” “violet” etc. These are not Blue sapphires. These should be classified differently and priced accordingly. Royal blue, Cornflower blue, Peacock blue are the mostly commonly preferred due to their vivid colors. Blue sapphire is typically cut in cushion, round, oval and emerald shapes to retain the carats and the color. Other popular cuts are pears, hearts and marquises.

Sri Lanka has long celebrated as the main source for large blue sapphires that are above the size of 100 carats. Incidentally, 60% of the largest gemstones including sapphires had been sourced from this small island in the Indian Ocean. The world's largest faceted blue sapphire,' Blue Giant of the Orient' owns its origin to Sri Lanka. Discovered in Sri Lanka in 1907, this brilliant blue 486 carat large sapphire was purchased by an anonymous American buyer and remained out of the limelight until it resurfaced at Christie's jewels auction catalogue in 2004. World's fourth-largest Sapphire, Blue Belle of Asia has also been mined from Ratnapura, Sri Lanka in 1926. The 400 carat peacock blue sapphire mounted on a necklace of diamonds and platinum fetched 17 million dollars at a rare jewelry auction in Geneva by Christie's in 2014, which is the highest ever price set on a sapphire.

The engagement ring given to Lady Diana Spencer by Charles, the Prince of Wales with a 12 carat Ceylon Sapphire set in 18K white gold is maybe the most popular piece of Jewelry with a Ceylon Sapphire. The royal sapphire originated from a mine in Pelmadulla, Sri Lanka, renowned for superior quality sapphires. Generations later the same ring was given to Kate Middleton, the Duchess of Cambridge by Prince William, continuing the legacy of Ceylon Sapphires.